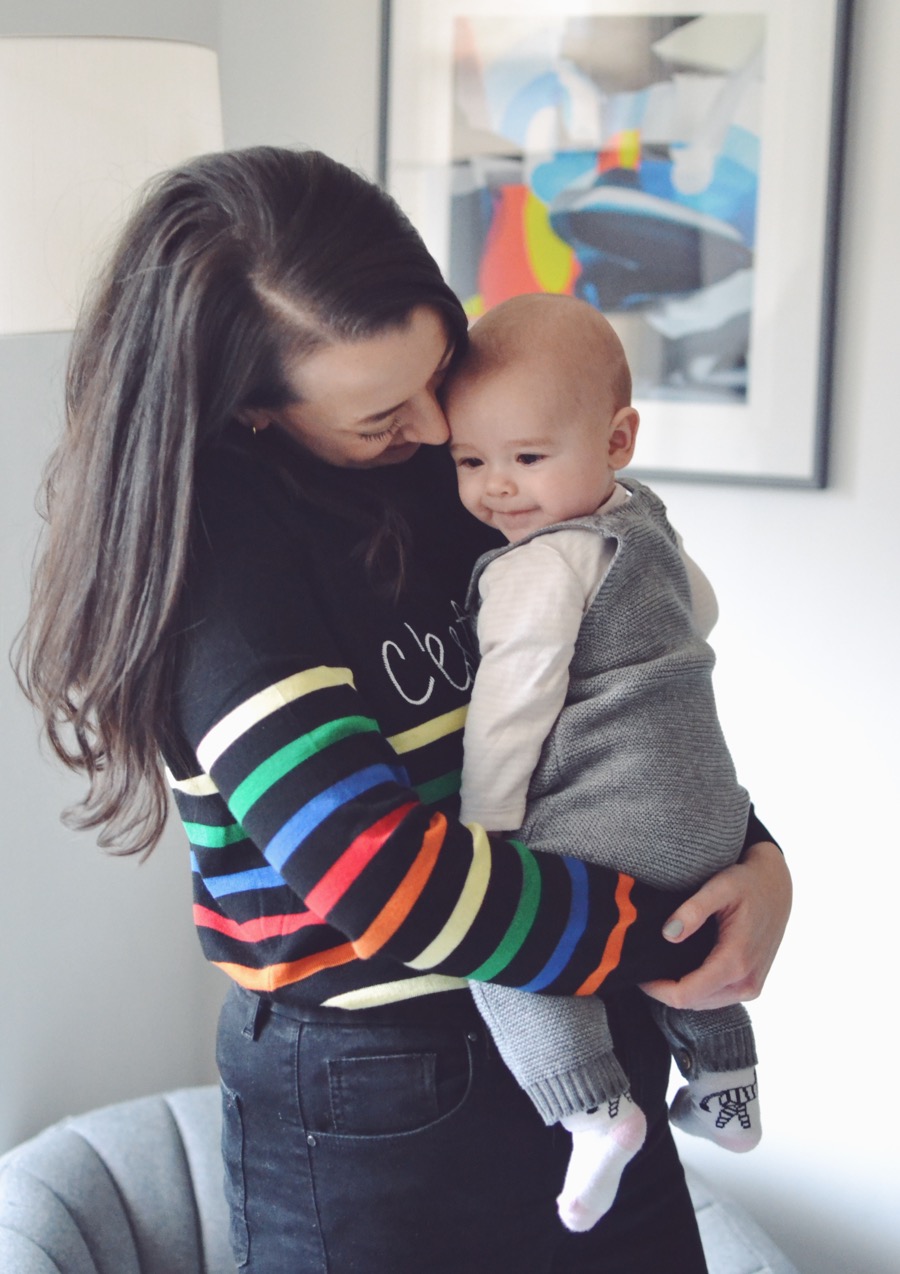 Now Eva is a whopping 5 and a half months old we’re in a pretty good routine that’s evolved as she’s grown and it’s thankfully working well for us (most of the time).

I have absolutely no idea if what I’m doing is ‘right’ but it works for us so I thought why not share? I haven’t shared anything like this before but I find it stupidly interesting reading about other people’s routines so I’m adding ours into the mix! The lovely Claire inspired this post, after reading her weekly routine with her gorgeous new babe, I wanted to share ours.

Eva is now sleeping in her own room and sleeping SO much better, I think I was waking her up when she was in our room as I’m still waking up a lot in the night. Soz Eva!

Anyway, onto our daily routine…

Wake up: She wakes up between 6-7 (if we’ve had a good night that is, sometimes she wakes at 5 for a feed and goes back to sleep until around 8), and I usually lie awake thinking about stupid things like regretting buying the pram or a hashtag I spelled wrong on a work tweet 6 years ago, you know, the important things.

Feed: After she wakes up we have a cuddle, I change her nappy if it’s bursting at the seams and then I give her a boob (or two if she hasn’t woken up in the night) and wind her. Winding can take a minute or it can sometimes take an hour, she’s quite sensitive to food (she’s allergic to dairy so I’m on a dairy free diet while breastfeeding, I would kill for a Snickers rn) so different things can affect her. I’m hoping she’ll grow out of it though!

I usually then let her play while I potter around putting a wash on, sorting the kitchen and eating some toast all the time I’m singing Disney or Bruno Mars and dancing around to keep her entertained. We then get her washed (just top and tail), nappy changed and dressed in some delicious outfit from her ever expanding wardrobe.

Morning nap: She goes back to sleep around an hour and a half to two hours after she wakes up, it’s generally pretty easy to get her to sleep for this nap, at the moment anyway! While she’s asleep I shower, get dressed and put make up on, it makes me feel a bit more human but every now and then we just get changed into clean pyjamas if we feel like it!

Feed: When she wakes up we have a cuddle and a look at what’s going on out of her bedroom window, she loves watching birds at the moment. Then I give her a boob, wind and change her. Then we head back downstairs and she has a wriggle on her play mat while I make some baby rice for her to have, we’ve only just starting weaning so she only has about 30ml. If we’re going out we skip the baby rice and have something else later on!

Midday nap: She’s usually awake for 2-3 hours and will then have a nap over lunch time. If we’re out and about she’ll either nap on me in the wrap or in her pram which she finally likes, hoorah! But if we’re at home she’ll sleep in her cot as usual. If she’s been awake for more than 2 and a half hours, I give her a top up feed as she’ll be getting hungry. If she does drop a nap, this is the one she’ll power through.

Nap wake up: She usually sleeps for about an hour if we’re at home and I usually have lunch while watching Youtube or TV, sort out the washing and do jobs around the house.

Feed: I give her a boob when she wakes up, change her nappy and we have a play for the afternoon. This is when I try her with other solids if she’s in the mood, she seems to love peas so far!

If we don’t have any activities, visitors or adventures planned that day then we go for a walk in the park, go to Aldi or just play at home practicing rolling and sitting up!

Afternoon nap: This is her last nap of the day and she usually goes down around 4 and I’ll let her sleep until 5.30 unless she wakes up before. Again, I change her and give her a quick top up feed if she needs it beforehand. Sometimes she stirs halfway through and I go upstairs and let her snooze on me while I read as an excuse for another cuddle! If she doesn’t, this is the nap I do something for me like eat 47 biscuits while watching TV or write a blog post.

Nap wake up: She wakes up between 5 and 5.30 then we start her bedtime routine with a boob. We then play in her bedroom for a while so she’s all digested before bath time.

Bath: We have a bath around 45 mins after she’s woken up and splash around with bath toys and singing loudly, either to Disney or whatever I fancy singing at her that day, she seems to like The Smiths at the moment! Once she’s all clean and splashed out, I change the music to lullabies, get her out of the bath and we do baby massage which is supposed to calm her down but really just tires her out while she kicks about! If she needs it, I’ll give her some teething granules too. Then I get her dressed, night time nappy on and move her into her bedroom and into her sleeping bag with more lullabies, a teether to chew on and the lights low while I tidy up the bathroom.

Bed time: Joe usually gets home around now and he’ll come in to read a book with us and have a cuddle then goes off to make us dinner. I give her the other boob and she usually nods off on the boob, but if not, I’ll give her the other side too to get a little bit of extra milk in her. I then half wake her up to wind her properly as she gets trapped wind pretty easily which wakes her up in the night. I then rock her to sleep and put her in her cot. I make sure she’s asleep then creep out like the stealthy creature I am. It’s usually about 7.30pm by this point and I am ravenous!

She usually stays asleep all evening which feels like such a treat as we get a few hours to eat dinner, catch up and watch something on TV before I fall asleep on Joe and have to take myself to bed.

Eva’s been a glorious creature and slept through the night the past couple of nights but she usually wakes for a feed at 2am or 5am, generally she’s awake for around half an hour to an hour in the night, worst case is two hours of constant winding, those are not the best nights!

But yes, that’s our current routine and what works for us at the moment! Obviously if we’re out and about it’s completely different and the timings change every day depending on when she wakes up. The only timings I try to keep to more strictly are the bed time ones because it’s working for us at the moment and we are all much better when we’ve had proper sleep!

Anyway, I hope that was interesting if you made it this far! It’s probably all going to change next month and throw it all off, but we’re here and ready for it.

WHAT’S IN OUR NAPPY BAG?