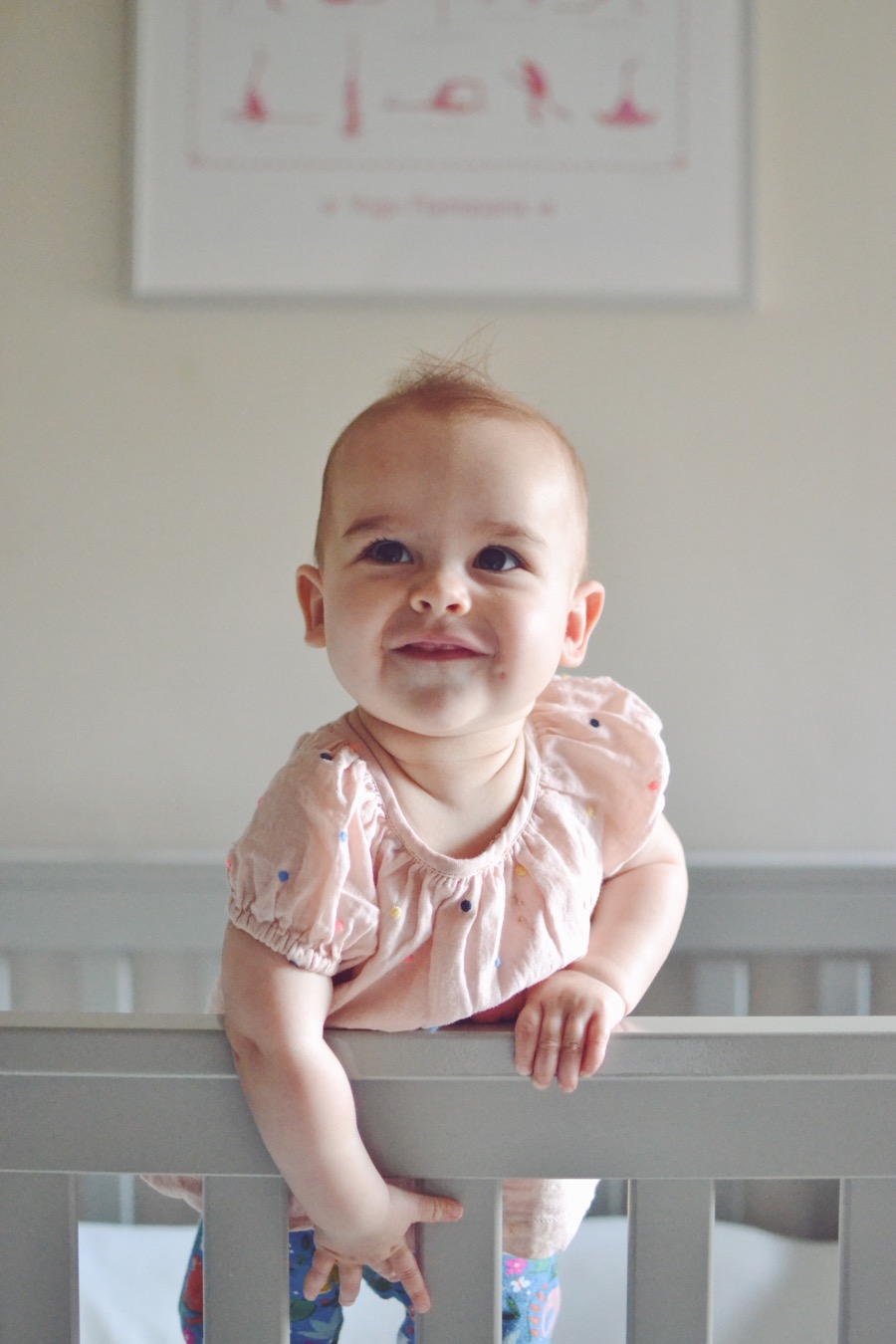 It’s been a while since I did a routine post, about 5 months in fact! Quite a bit has changed since my last post so I thought I’d pop a little 9 month old baby routine post up. I’m not sure if what I’m doing it ‘right’ but it works for us so I’m sticking to it! The below is an ideal day of our 9 month old baby routine but it all depends on when Eva wakes up in the morning and how long she naps during the day. But as a general rule I stick to a 2-3-4 routine – 2 hours awake, nap, 3 hours awake, nap, 4 hours awake, bed time. It works for us most of the time!

Eva is still breastfeeding as well as eating three meals (or more often throwing them on the floor…) and drinking water from a sippy cup. She is allergic to cow’s milk, eggs and tomatoes (sigh) so the food she eats reflects that. I also have a dairy free diet as I’m breastfeeding and the bloody milk gets into my milk! I am gagging for a Snickers. She starts nursery at the end of this month so I’m sure this is all going to change very soon!

7am – Wake up and milk feed

She usually wakes up around 7am at the moment, her favourite time being 7.01am, she’s woken up then 3 times in the past week the tiny lunatic! I’ll feed her in her room, change her nappy and start the day by taking her into our bedroom to play and wake Joe up. Joe usually stays asleep but tells me he enjoys us being there so I carry on doing it!

She does often wake around 4am for a quick feed too but it usually only takes around 10-15 mins to get her back to sleep thankfully.

Breakfast is usually pretty fun, I sometimes dread the other meals in the day but breakfast is the easiest one! I start by giving her some banana (splitting a chunk into three by pushing my finger down the middle which yes, does feel and sounds wrong) while I sort breakfast out and tidy the kitchen a bit.

She’ll usually have Shredded Wheat and Shreddies soaked in soya milk with dry Cheerios to play with and work on those fine motor skills. She’ll usually have some raspberries and blueberries on the side too. Sometimes she has toast, overnight oats, yoghurt, porridge or banana pancakes but it’s usually cereal at the moment as she likes it. She doesn’t eat a huge amount but it’s enough and gives me time to have a bowl of cereal with her. She’ll have water from her sippy cup too but sometimes likes to drink from my glass, I think she finds it fun!

After breakfast I get her washed and dressed, then we play in her room for a little while before nap time.

I rock her to sleep which usually doesn’t take long thankfully as she’s getting heavy! I really need to sleep train her but I’m soaking up all the extra cuddles I can get before she starts nursery and I go back to work. She usually sleeps for about an hour and a half, but sometimes it’s half an hour and sometimes it’s two hours!

While she naps I shower, get ready, sort the house out and relax for a bit if I have time.

Once she wakes up I feed her and change her nappy. We use Rascal + Friends nappies which are by far the best ones I’ve tried and available in Tesco. We are very lucky to work with Rascal + Friends and have our nappies free of charge for review purposes. Then we’ll either play in the living room or the garden, or head out to do something. We go swimming, shopping, meet friends, go to the cinema and all sorts!

If we’re at home for lunch I’ll give her something like avocado or vegan cream cheese on toast, puff pastry pin wheels or pesto pasta. She’ll always have cucumber to start while I prep everything else and veggies on the side too. With yoghurt and/or fruit for pudding, she loves strawberries, raspberries and blueberries at the moment!

If we’re out for lunch I’ll pack a pot of veggies and cucumber as well as a pot of fruit, then I’ll order her some toast or pasta while we’re out. I also take a pouch which she’ll have if she’s in the mood, she likes Babease and Piccolo pouches best. I also have a stash of snacky things like melty sticks and rice cakes in case she’s being picky or we’re somewhere like the cinema.

Again, she doesn’t eat a huge amount but it’s enough! She would eat yoghurt and fruit until she exploded if I let her though. She has water alongside too.

This is always the dodgy nap! Timings are everything with this one as it dictates what time bedtime is and it can go very wrong sometimes!

If we’re out I’ll let her nap in the car which means it’ll be about half an hour and is much easier! But it also means I don’t get any time to myself in the afternoon and every minute of me time is precious, even if I use it to clean the bathroom…

She wakes up around 3.30pm (but I’ll wake her at 4 if she’s not already awake) and I feed her and change her nappy.

If it’s a sunny day and we’re at home we’ll go for a walk round the park (usually dog spotting, our record is seeing 54 dogs which quite frankly is too many dogs) and if it’s raining, we’ll watch a film and play with her toys in the living room. She’s recently started climbing everything and wanting to stand up a lot so I let her tire herself out!

I usually dread dinner time as I have to stop her having fun playing and take her into the kitchen to feed her things she probably will just throw on the floor anyway. Not my idea of fun and just a little soul destroying!

She’ll start with cucumber and veggies while I sort dinner out, I usually try and give her something homemade that I’ve prepared during a nap time but she generally has a little bit then throws it on the floor. I make a lot of things from the Young Gums recipe book which I’d really recommend, I use it SO much. The recipes are all for 2 adults and 2 kids so it’s great for making things for us which Eva can have some of.

If she won’t eat what I’ve made (sob), I’ll try a pouch, snacks and similar things to lunch while. She’ll always eat plenty of fruit too, she loves watermelon and steamed apple slices.

After dinner I’ll put Eva in her room to play with her toys while I quickly sort the bathroom and run the bath. I have to check on her about every 30 seconds to make sure she hasn’t made a bid for freedom as she is very good at crawling! Our bathroom is tiny otherwise I’d bring her in with me. We either listen to Classic FM, Disney or whatever music I want to introduce her to depending on what mood she’s in.

She spends ages splashing around playing with toys. Her favourite game at the moment is passing me little cups for me to grab with my teeth. She find this HILARIOUS. I get her washed while she’s splashing and play with her while talking about what we’ve done that day and plans for tomorrow, mostly so I remember what our plans our! We end with brushing her teeth, I start her off and she finishes it by chewing her toothbrush.

Then I get her out of the bath and into her Cuddledry towel which is the best, I dry her off while tickling and blowing raspberries to keep her amused. I used to do baby massage but she’s way too wriggly now so I just moisturise her with Child’s Farm moisturiser (we use the unfragranced one) while she plays with a toy or takes all of the baby wipes out of their packet one by one. I’ll get a dry nappy on her and apply some teething gel if she needs it, I’ll also give her some Calpol or Nurofen if she’s in pain with teething.

Joe usually gets home from work just as we’re finishing bath time so he has time to read her a book. His favourite is Owl Babies at the moment so he’ll read that to her while I lie down in a dark room for 3 minutes to contemplate the day. I then go back in and feed her to sleep, if it goes well I usually feed her 10 minutes each side, winding her in between and she drops off.

I sit with her for a few minutes after she’s fallen asleep to wind her and make sure she’s properly asleep, then I transfer her to her cot. Usually she sleeps through until about 4am or 6/7am depending on what she fancies.

She’s nearly 10 months old now and will be starting nursery this month so I’m guessing this will all change soon. Hopefully we’ll get sleep training to work too, but to be honest, we only have a month left together and I don’t want to make it a stressful one! But any tips or tricks are very welcome if you want to leave them in the comments below.

I’d love to hear about your routine too! Is it like ours or completely different? I find it so interesting how everyone approaches it!

13 Handy Things to Know When Travelling with a Baby