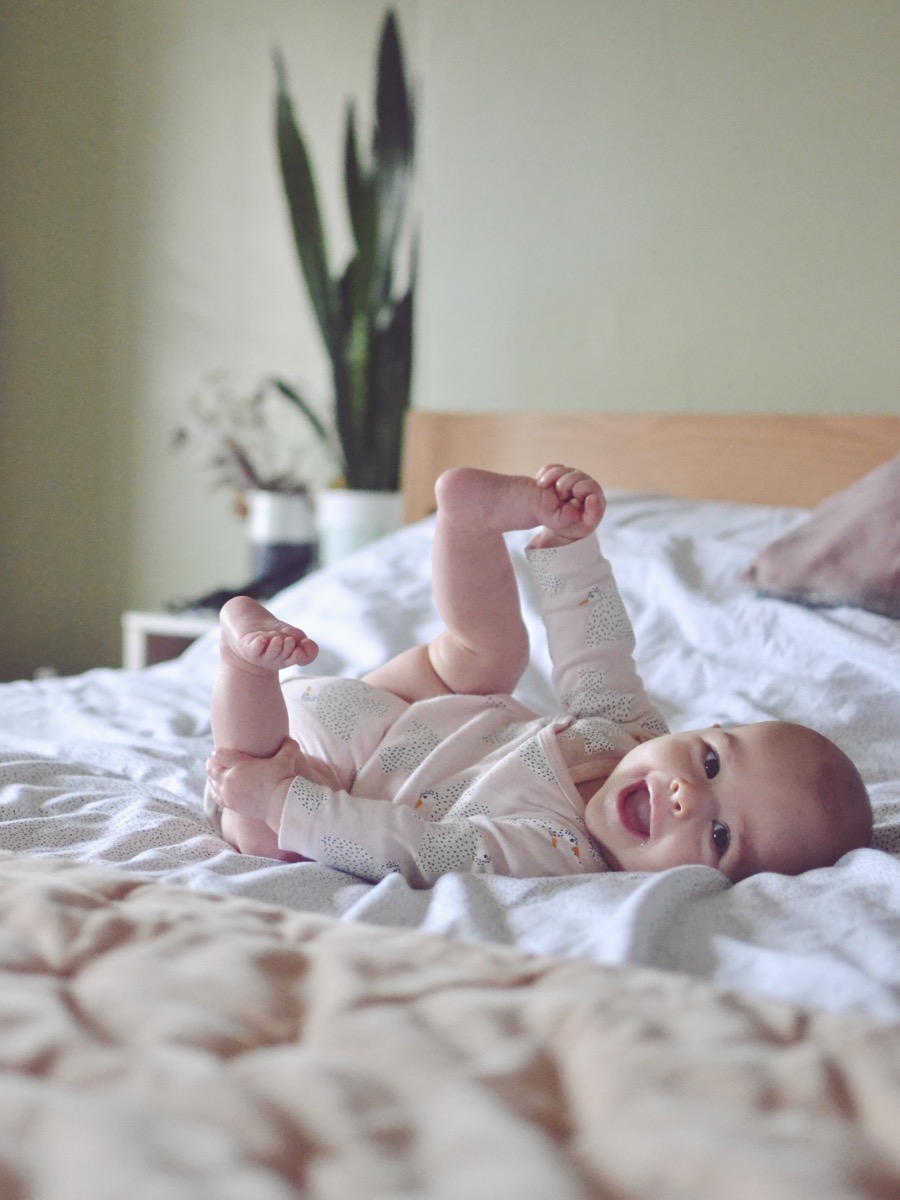 It feels like only yesterday I was packing my hospital bag ready for Eva’s arrival but here we are, parents to a six month old! Time is going ridiculously quickly and as much as I want to savour the moments when she’s tiny and delicious, it is so bloody lovely to see her grow, develop and become more of a person every day.

I’ve learned so much about her, she loves peas but hates broccoli, she’s very into shiny things but hates being stuck in traffic like her dad and she is an absolute delicious squish.

I’ve also learned a few other things in my brief stint of motherhood so far so I thought I’d share on Eva’s half birthday!

1. It is really bloody hard

I knew it would be hard but nothing can really prepare you for the sheer relentlessness of it all. In the early days it’s very monotonous – feed, sleep, change nappy, repeat. And babies don’t know about night time and that they’re supposed to sleep then for quite some time! Sleep deprivation is a cruel mistress and makes you a very tired, grumpier shell of your former self. BUT, it does get so much better. Until the four month sleep regression that is…

2. You really do forget about the pain of pregnancy and childbirth

I thought I would be scarred for life (mentally and physically) after childbirth but if anyone asks about the birth, I now generally say I quite enjoyed it and had a good day with Joe which is mad if you think about what happened! Read my birth story here if you fancy.

I also completely forgot I had back pain that stopped me sleeping for about 6 months of my pregnancy until I was chatting to a pregnant friend the other week. My brain has actually erased all of the bad bits and just thinks about how lovely it was to carry her in my massive belly and feel her little kicks. The human body is mad.

3. People despise prams with a passion

I was SO not prepared to be treated how I’ve been treated in the street with a pram. Mostly just dirty looks but I’ve also had pretty offensive comments a couple of times too and I’m a pretty conscientious driver! It’s not what you need when you have a 3 week old baby and it’s the first time you’ve braved going into town I can tell you.

I think it’s just because they’re so big and on a busy street obviously can get in people’s way if they’re in a rush, but there’s no need to be a dick.

4. Having a support network is so important

I definitely regret not doing NCT classes and having a little gang of mum friends from the beginning but I do have a wonderful group of friends from the pregnancy yoga retreat I went on, a group of the friendliest, loveliest mums from a parenting course called Incredible Years we’ve just finished and people on Instagram who have similar aged babies, all of these people have been absolutely invaluable to me.

Our friends and family have been absolutely amazing from helping out with Eva, bringing round lunch in the early days or just checking in to see how we are. I’ve also found it so good to have those friends who aren’t mega into babies who just want to have a glass of wine, eat pizza and chat about everything and nothing. Special shout out to Rebecca and Laura here for being solid takeaway buddies helping me keep my sanity.

5. There are so many things people don’t tell you about having a baby

Breastfeeding makes your armpits itchy.
Iron tablets make your poo black.
You lose A LOT of hair, like handfuls. And it grows back in horns.
Babies have a sleep regression at four months which means just as they’ve started sleeping better, they forget it all and start waking up constantly.
Baby farts are as loud and smelly as grown up farts.
Breastfeeding burns about 500 calories a day, it makes you VERY hungry! My cousin did warn me about how thirsty it makes you though, thank you Alice.

6. It’s crazy how much you love them

Sometimes I just message my mum asking if it’s normal to love her so much I want to eat her. She says yes but I’m not 100% sure.
The love is ridiculous. It wasn’t instant like some people say but it’s bonkers. I can have the worst time putting Eva to bed but then go downstairs to Joe and show him pictures and say how wonderful she is. I look forward to seeing her if she wakes up in the night because it means extra cuddles and every time I walk in her room when she wakes up she has the biggest smile on her face.

Those are a few of the things I’ve learned anyway! Let me know what else you’d add in here, I’d love to know.